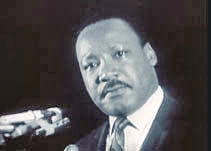 I remember exactly where I was on April 4, 1968. Thirty nine years ago today the Rev. Martin Luther King, Jr. was assassinated in Memphis.

That week day, like many others in my senior year in high school, I drove to Bradlee’s Department store on the Lynnway in Lynn, MA to punch in for the evening shift earning some money before entering Boston University in the fall.

The news spread quickly that Thursday evening that King was dead. It didn’t take long to realize that my shift as a retail clerk would be different from all the others. The store quickly emptied out. Not a customer in sight all night. No need for Mr. Silverman, the shaken and somber store manager, to send me out on outside carriage control. The bullets in Memphis were enough to bring a normal business day to a halt in Lynn and most of the nation. Just five short years before I had come home from junior high on a late summer day to watch King deliver his “I Have A Dream” speech – an event that would inspire so many of us to become active in politics and protest.

There are many good remembrances of what King said and stood for on his national holiday In January every year, but not so much is being said on this anniversary of the day he died. It's worth remembering on April 4th and throughout the year why King was in Memphis on a day I will never forget.

By 1968, Rev. King was widening the concerns of his movement. In Where Do We Go From Here? King opposed a Vietnam policy that had begun to break the nation further apart. The lunchroom sit-ins and battles over accommodations and voting rights were giving way to a broader agenda. He was planning a new march on Washington – “the Poor People’s Campaign” -- when he decided to take up the cause of 1,300 Black sanitation workers in Memphis, a city of southern segregation, where the white power structure opposed the right to unionize and the Mayor vowed never to bargain in good faith in a way that would give the sanitation workers their dignity. The strike and a citywide economic boycott were a cause King knew he could not ignore.

King’s prophetic “I’ve Been to the Mountain Top” speech on the eve of the assassination is his best known from Memphis. But two weeks earlier, on March 18th, King galvanized support for strikers by saying: “So often we overlook the worth and significance of those who are not in professional jobs, or those who are not in the so-called big jobs…..One day our society will come to respect the sanitation worker if it is to survive.” Following King’s assassination, the Memphis power structure gave up its intransigence – recognizing the union, awarding pay raises and instituting merit promotions.

King’s campaign for striking sanitation workers reaffirmed his greatness at the hour of his death and resonates today in the cause of social and economic justice. That is worth remembering most from the day he died.